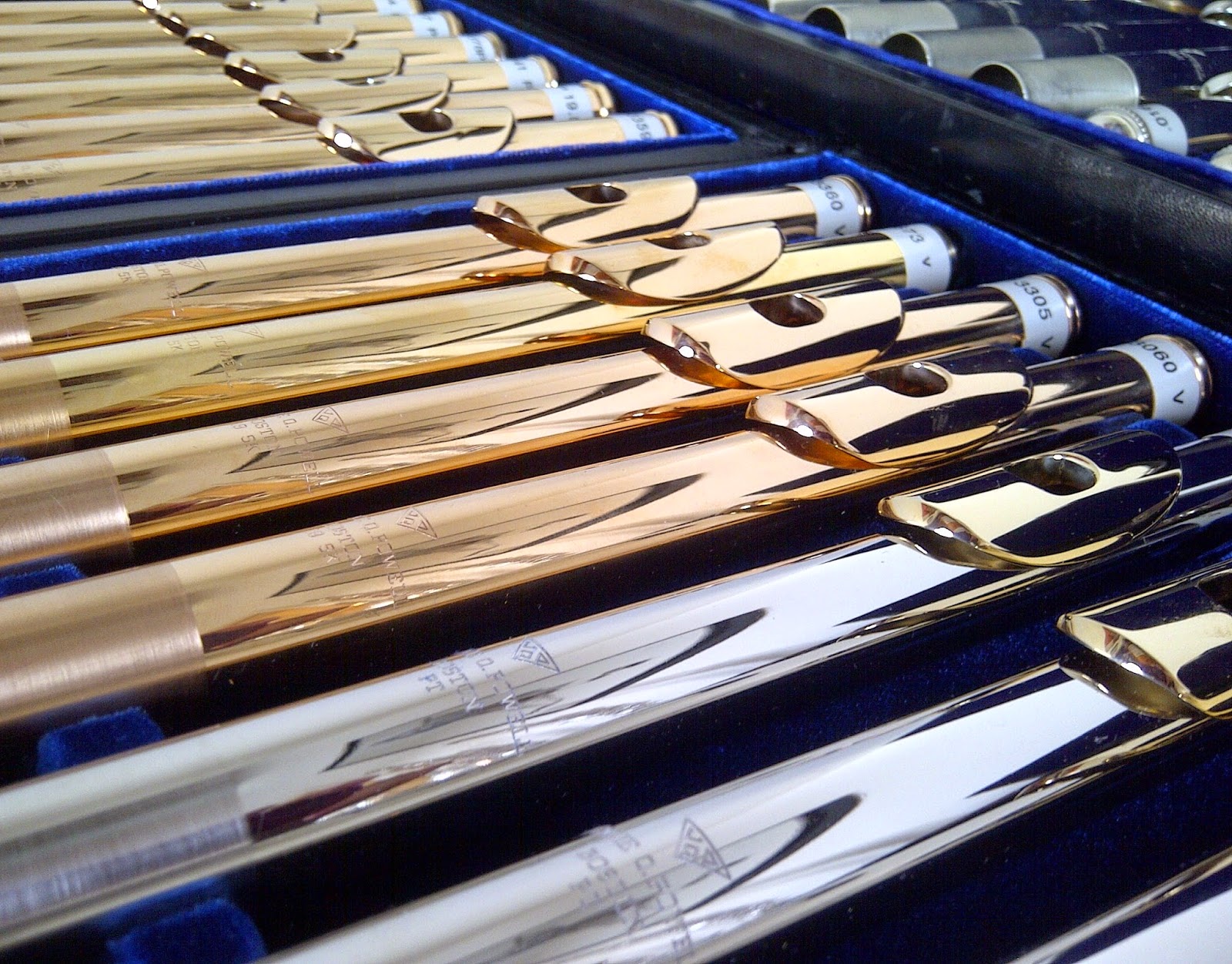 The answer is – yes, there are differences.  The overall process is essentially the same, but the technique differs.  In fact, Lindsey told us that she has a different technique for each metal – including the different karats of gold (9k, 10k, 14k, and 19.5k).  Of course, there are also platinum and Aurumite (9k and 14k) headjoints to be cut!  The main factor amongst the metals is hardness.  Silver is the softest, gold is harder, and platinum is the hardest.  With each increase in karats gold, the hardness increases as well.

In regard to metal qualities, silver is the easiest to work with from what Lindsey shared.  She said when cutting silver headjoints, the pieces come off evenly and smoothly in strips – almost like pieces of curling ribbon.  Gold, however, is much harder, and the pieces come off in chunks.  Because it is so much harder, Lindsey must exert more pressure on the gold with her tools.  Gold headjoints also require more sanding and are so hard that they can actually tear sandpaper in the process!  That being said, Lindsey told us that her sanding technique definitely varies from karat to karat in the gold family.


It was great speaking with Lindsey to find out more about this cutting metal headjoints.  We knew the processes for wood and metal were different, but it truly was eye-opening to find out just how specialized the techniques are even within the metal category!

Posted by Powell Flutes at 9:42 PM No comments:

We recently had the pleasure of meeting with Weiling Zhou, our engraver and one of our flute finishers.  After seeing so many examples of his engraving work, we were curious to know more about the process…

Weiling engraved his very first flute with a small screwdriver!  As he became more interested in the engraving , he went straight to the library for extensive  research.   Powell’s VP of Production, Rob Viola, asked Weiling to engrave for the company and then provided Weiling with tools and engraving bowl base.  Weiling now has about 50 different engraving tools.

He also has a book of his own engraving patterns, although he makes many custom designs for people.  Custom patterns can be especially difficult on lip plates due to their complex shape.  One of the most popular engraving requests he receives is for bird patterns.  Weiling has several books with photos of birds that he uses to guide his engraving.  When it comes to birds, Weiling tells us that engraving images of them from the side is easier, and some birds (like the eagle) are very distinctive.  Because engravings do not have color, it may be difficult to tell the difference between a blue jay or cardinal -- so it's best to stick with something simple that looks good in black and white.  Initials are another popular engraving request, which Weiling tells us takes about 10 minutes.  Engraving a key cup takes roughly 40 minutes.

So, how exactly does the process work?  Weiling showed us with the example of a key cup.  He marks lines within the cup to help as guides and then sketches in the shapes or patterns to see, roughly, how they will fit and work best.  The engraving bowl vase can be adjusted to hold headjoints, barrels, and anything he is engraving.  When it comes to a smaller part like a key, the key is first "stuck" to an adapter with a waxy substance known as “pitch”  He then takes the appropriate tool for the cut he is going to make and begins.  Because the bowl rotates, it makes it much easier to engrave something round like a key.  Each line is cut with a single stroke, and these lines are engraved in a series to make the pattern.  To engrave texture, he uses more pointed tools and lightly taps them into the metal with a small mallet.


We were quite mesmerized watching Weiling create these patterns and textures all completely by hand.  He did mention that it is best to engrave solid metals because engraving through plating causes rust.  So, if you've wondered whether hand engraving is really done by hand, well, we can see that it is!  If your flute is not plated and you are interested in having engraving done, make sure to contact our Director of Quality and Service, Rebecca Eckles, and she would be happy to help.  She can be reached at reckles@powellflutes.com or by calling (978) 344-5160.

Posted by Powell Flutes at 12:30 PM No comments:

Last week, we visited with Signature flute and piccolo stringer Ranjana Ranjana as she was building the pinned Signature flute mechanism.  We also had the chance to speak with her about the Signature piccolo mechanism, which (just like the Signature flute) is pinned.  Why is it pinned and not pinless? Well, it is actually quite simple -- there is not enough room for a pinless mechanism on a piccolo!  As you can imagine, everything is very small on the piccolo mechanism, and there is simply not enough space to create the bridges that a pinless mechanism requires. So, both Signature and Custom Powell piccolos have pinned mechanisms.

As for the process of building a pinned piccolo mechanism, it is basically the same as building a pinned flute mechanism. Ranjana must insert the pins and cut them to length -- making sure that the mechanism components fit and function properly. In the photo below, Ranjana is holding the right hand section of a Signature piccolo mechanism that she was building.  You will see a red arrow pointing to one of the pins that has been inserted but not yet cut to length.  There is a red circle around one of the finished pins (it is at the top of the mechanism, all the way to the right of the red arrow). 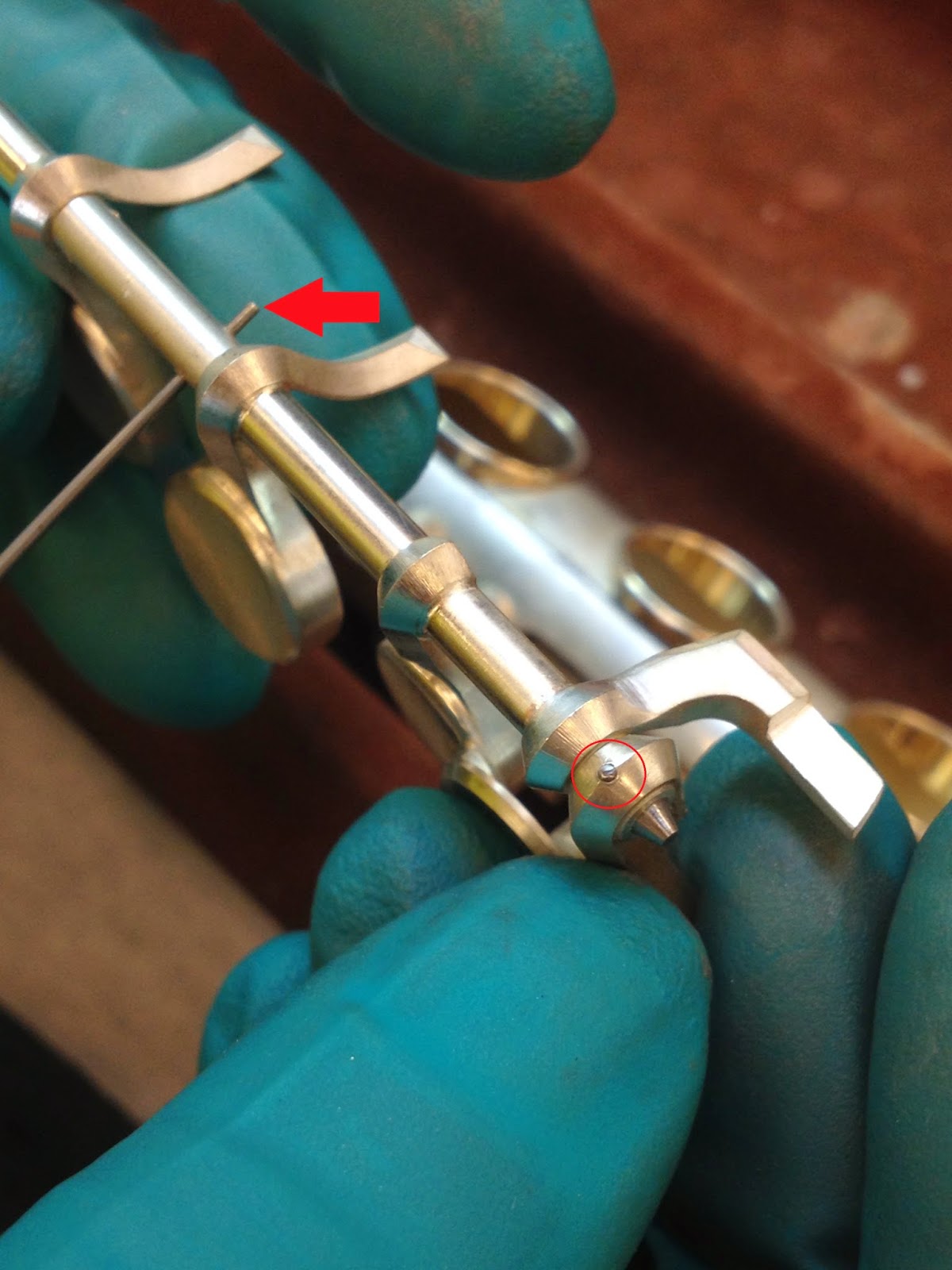 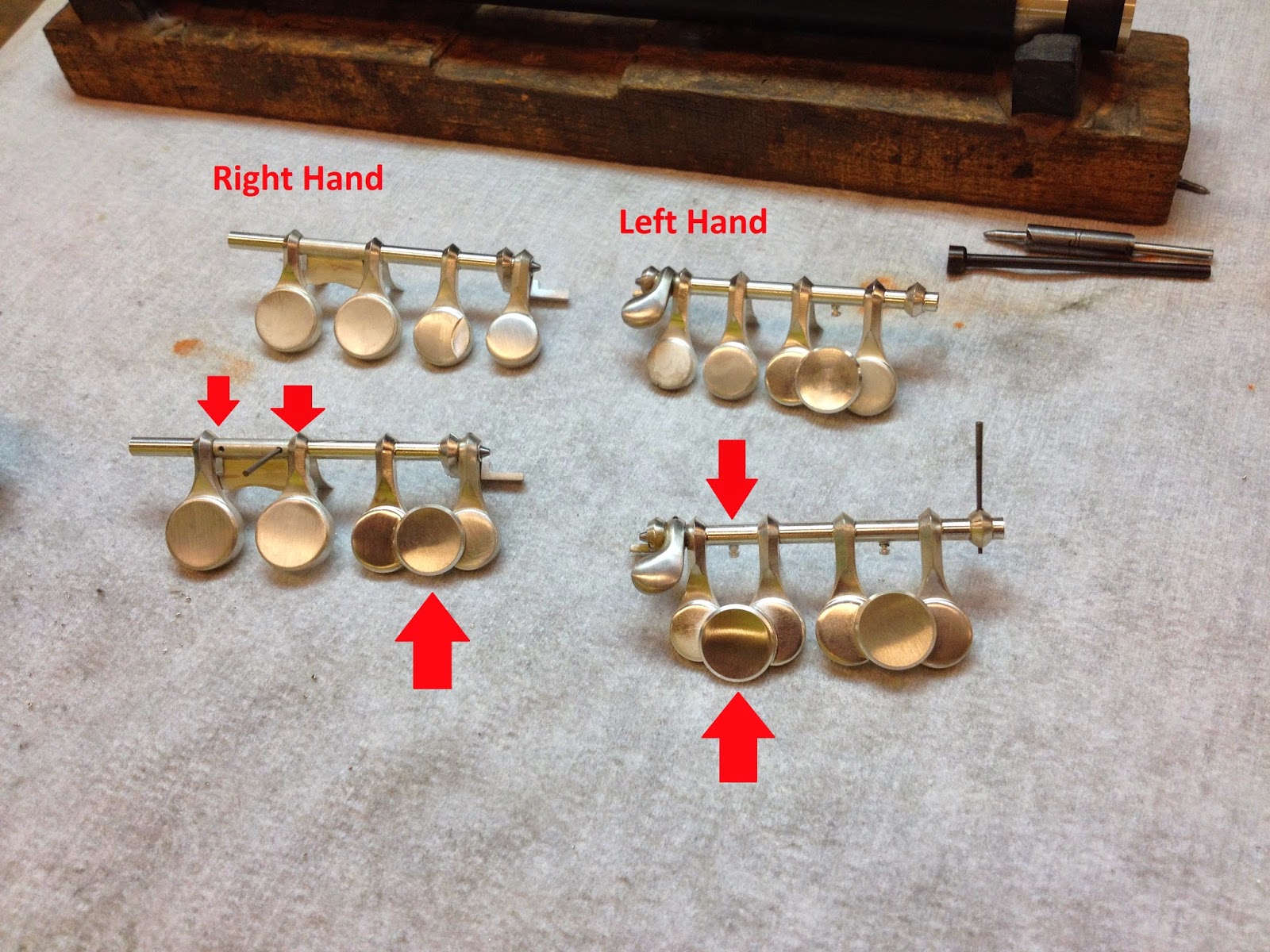 The Signature piccolo is made from grenadilla wood and has a sterling silver mechanism.  It is available either with or without a split-E, and the standard headjoint options are the Classic and Wave style headjoints.  Follow this link for more information on the Signature piccolo.

Posted by Powell Flutes at 11:49 AM No comments: