We recently had a customer inquire about the model number of his Powell Sonaré flute.  Going back through our serial number files, we discovered that the model he owned was the Sonaré SF-5000, which was actually a very early Sonaré model.  We knew this from the model number and prefix, which have changed over the years as the line itself has...

Powell introduced the Sonaré model flutes at the NFA Convention in 2002.  The history behind the concept is explained by Powell's President, Steven Wasser, in a previous post here on Flute Builder titled The Sonaré (R)evolution (click here to read the post). The very first Sonaré model was the SF-6000, which had a sterling silver body and Y arms.  Two SF models followed -- the SF-5000 and the SF-7000.  The SF-5000 had a nickel silver body with Y arms, and the SF-7000 model had a sterling silver body with pointed arms.  Each of these models had a Powell headjoint which was made at the Powell shop in Massachusetts.  The bodies for these instruments, which had drawn (or extruded) tone holes, were made overseas in China.  In 2006, Powell developed a new patented technology for extruding tone holes.  The new patented process, named "Zinki," was then used to produce the Sonaré bodies at Powell as well.  Powell's President, Steven Wasser, wrote:


During the first few years of Sonaré’s existence we wound up using 4 different scales made by our Chinese partner.  We ultimately standardized on a single scale – the one we though was best – but were still not satisfied.  Since the acoustics of the flute are determined first by the headjoint and secondarily by the scale, we decided to focus our engineering talents on the body.  To make a long story short, in 2006 we came up with a technology we’ve called “Zinki,” that allows us to economically extrude tone holes at Powell with our Modern Powell Scale.  Since then we’ve used Zinki to extrude all Sonaré flute bodies, as well as our Conservatory and Signature flutes.  Even Custom gold flutes with extruded tone holes are done on Zinki

This body production change also marked a change from SF to PS in the model numbers.  Model numbers are engraved on the barrel of the Sonaré flutes, and you will see in the photo below of the PS-601. 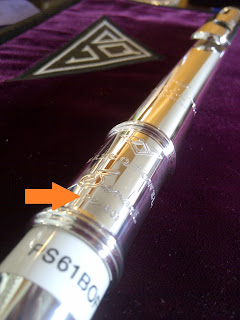