Steels -- What Are They? What Do They Do?


We've written several posts that include the term "steels," but have you ever wondered what "steels" are exactly?  Well, steels are a very important part of the flute mechanism, but, once the flute is finished, you really won't see them -- because they are inside the mechanism tubing.  In a previous post, Powell's President, Steven Wasser, summed up the function of steels quite nicely:


The “steels” for a flute mechanism are the axles on which multiple keys rotate so that tone holes can be opened and closed. If, for example, there are 4 distinct keys on the right hand of the flute, we don’t want all these keys going up and down at the same time, yet it would be impractical to have 4 separate steels, one for each key. There are different ways of creating independent motion of multiple keys on one steel, which include building pinned and pinless mechanisms.  (Follow this link to read the full post, "Pin Pals - Part I.)

We stopped by flute finisher Matt Keller's bench while he was finishing a 10k yellow gold Powell Custom.  This gave us the opportunity to see the steels completely separated from the rest of the mechanism.  In the photo below, you will see the complete set of steels for the 10k flute taped together with scotch tape in the flute kit: 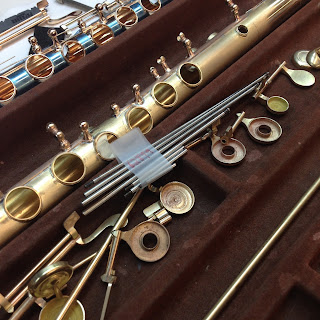 As one might imagine, the steels are made of steel and are small rods that run through the inside of the outer mechanism tubing. As you can see from the photo above, there are several keys, and these keys are soldered to the outer mechanism tubing.  The keys (with tubing) must be aligned and positioned properly for the mechanism to function.  So, the steels are threaded through the tubing and then held in place at the posts.   Pinned mechanisms have pivot screws that screw into the posts and then into the ends of the steels to hold the steels in place.  For pinless mechanisms, steels have a screw-type head at one end of the steel to hold them in place at the posts. 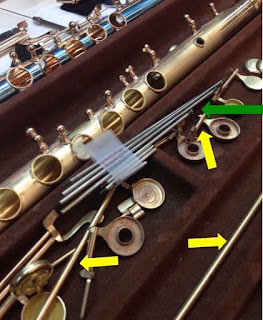 As mentioned in the top of the post, you won't see the steels since they are inside the mechanism tubing, but they play an important role!  Steels are cut and fitted to each flute individually. They must be straight and run smoothly through the posts.  For more on steels, follow this link to watch as steels are cut and fitted to a 14k white gold flute in the previous post titled, "Building the White Gold Flute - Part 4."
Posted by Powell Flutes at 1:27 PM