Powell #365 - A Platinum Flute for the World's Fair

In 1938, Verne Powell was commissioned by Engelhard Metals to create a Concert C flute made of platinum for the Engelhard exhibit at the 1939 World’s Fair.  Mr. Powell immediately set to the task, and in 1939, he completed Powell #365 – a platinum flute with sterling silver keys.  He engraved the Trylon and Perisphere (the logo for the fair) on the barrel to indicate its unique origin.

One week before the flute was supposed to be delivered to the Fair, William Kincaid (Philadelphia Orchestra, principal flute) came to visit Mr. Powell in his workshop.  Powell asked Kincaid to test the new flute he had made.  Kincaid tried the new flute and was amazed at its fluidity and color.  He offered to purchase the instrument on the spot.  Mr. Powell explained that the flute was to be delivered to the Fair, but that after the show Mr. Kincaid could purchase it.

As soon as the instrument was back in Boston, Mr. Kincaid picked it up – and from that day until his death in 1967, it was his number one flute.

When Mr. Kincaid passed away, he left his platinum Powell flute to Elaine Shaffer, a favorite student of his at the Curtis Institute of Music. She went on to become principal flutist with the Houston Symphony and later enjoyed a career as a soloist.  In a tragic turn, Ms. Shaffer passed away in 1973 at age 47 of lung cancer. Kincaid’s platinum flute, along with Shaffer’s 3 other Powell instruments were left to her husband.

Ms. Shaffer’s husband, Efrem Kurtz, was a conductor (Houston Symphony) and understood the value of these flutes.  He kept them in his possession until 1986 when he put them up for auction at Christie’s auction house in New York City.

The auction was held in November and was attended by many fine musicians.  The first silver flute offered at the auction was sold for $4,400 to a professional orchestral flutist, and the second silver flute went to the (then) President of the New York Flute Club for $4,950.  The 14k gold flute was sold to an anonymous bidder for $27,500.

When the bidding for the Platinum flute began, there were only two parties involved - a New Hampshire antiques dealer and a well-known collector of antiques in New York City who was also a flutist.  The auction also drew some very notable celebrated figures, including Andy Warhol, who was a friend of the New York City-area collector.  As the bidding increased to $80,000, the New Hampshire-area dealer dropped out, but a yet another collector stepped in his place.

After the sale, the winning bidder said, “I own a dozen great flutes, but this one is the best there is.  If you’re a collector, the greatest in its field is the only thing worth having, and you have to expect to pay well for it.”

In the recent past, Powell #365 was on loan to the Metropolitan Museum of Art as part of their Musical Instruments collection but is now in the hands of a private owner. 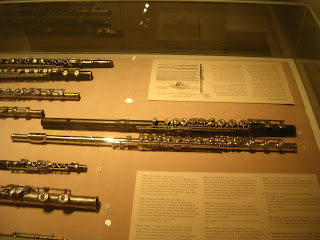 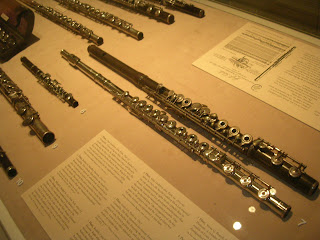 Posted by Powell Flutes at 4:21 PM