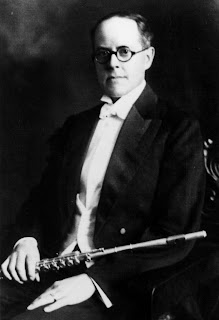 We’ve read many historical accounts of Verne Q. Powell’s life – namely about his first “Spoon Flute” and his early days as a flute maker in Massachusetts.  We’ve also read about the inspiration for some designs (like the “gizmo”) and historically significant flutes.  When looking through our archives, we found a very interesting account of Mr. Powell and how he inspired one very unlikely student as you’ll see from the letter below…

When my young son needed a flute for his music lessons around 1948 I was sent to the Powell workshop where I was told he had an old used flute for sale.  He was located on Huntington Avenue close to Symphony Hall and en route to my hospital.  My medical bag in hand, I met Mr. Verne Powell as arranged.  He was a dignified, white-haired gentleman who was in obvious great discomfort.  He was squinting one eye which was red and tearing copiously.  I was told that he was being treated for an infection for three months and it was getting no better.  Infections that lasted a long time were not uncommon in this period before anti-biotics were available.

The presence of a doctor’s bag, like the gun in the holster of the policeman, gives the owner the feeling that he can ask questions or give orders that he would otherwise flinch from doing.  “Let me look at your eye”, I dared to say.  The same bag which gave me the authority to make my request had an opposite effect on the patient to become submissive and show respect.

So, without further ado, I put a drop of anesthetic from my bag into the sore eye so I could better examine him.  Of course, the severe pain in his eye immediately disappeared.  Mr. Powell was enormously impressed with my skill at so quickly removing his discomfort.  A magnifying glass and a good light, in addition to the sight in my young eyes, showed that what he had was not an infection, but a tiny sliver of metal deeply imbedded in the front surface (cornea) of his eye.  I went to my bag, put another drop in his eye to insure good anesthesia and then, with a sterile instrument, promptly removed the foreign body.  In twelve hours he was completely cured and free of symptoms.

Well, from then on we had a special relationship which led to me taking flute lessons at age 42, and of course buying a Verne Q. Powell flute - the Commercial type.  In 1952 I decided I had to have the French open key model.  My teacher was Jimmy Pappoutsakis who was also a patient of mine and lived six doors away.   The normal wait was two years, but Jimmy recommended a flute which had just been made for him - #1142.  Mr. Powell was kind enough to engrave this flute with his own signature - a sort of personal special thanks for helping him overcome his eye problem.  And, incidentally, the only Powell flute with such an inscription.

P. S. On a number of occasions I had the use of his original first flute made by him from melted--down family silver, for which he said he was never forgiven.

Posted by Powell Flutes at 1:30 PM