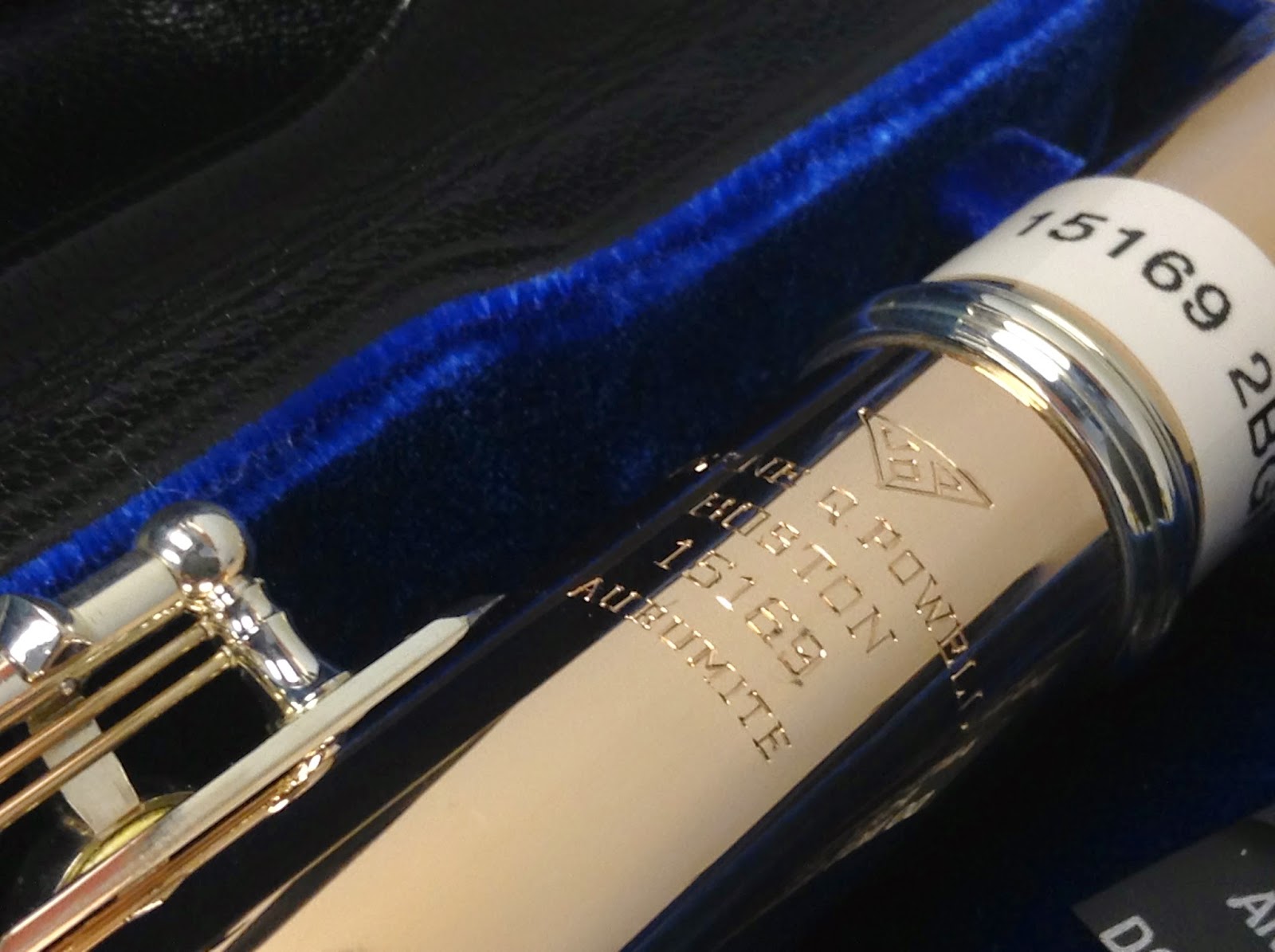 We debuted our newest Aurumite® flute, Ruby Aurumite, at the August 2014 NFA Convention and realized that we hadn't written about it here on the Flute Builder blog, so we wanted to share more about it!

Since we've taken the Ruby Aurumite to shows and flute fairs across the country, it has certainly gotten a lot of attention and a great response from those who have tried it.  Flutists have found Ruby Aurumite to be a flute that is very responsive and easy to play.  One of the questions we hear quite a bit is, "So, what's different about the Ruby Aurumite?" 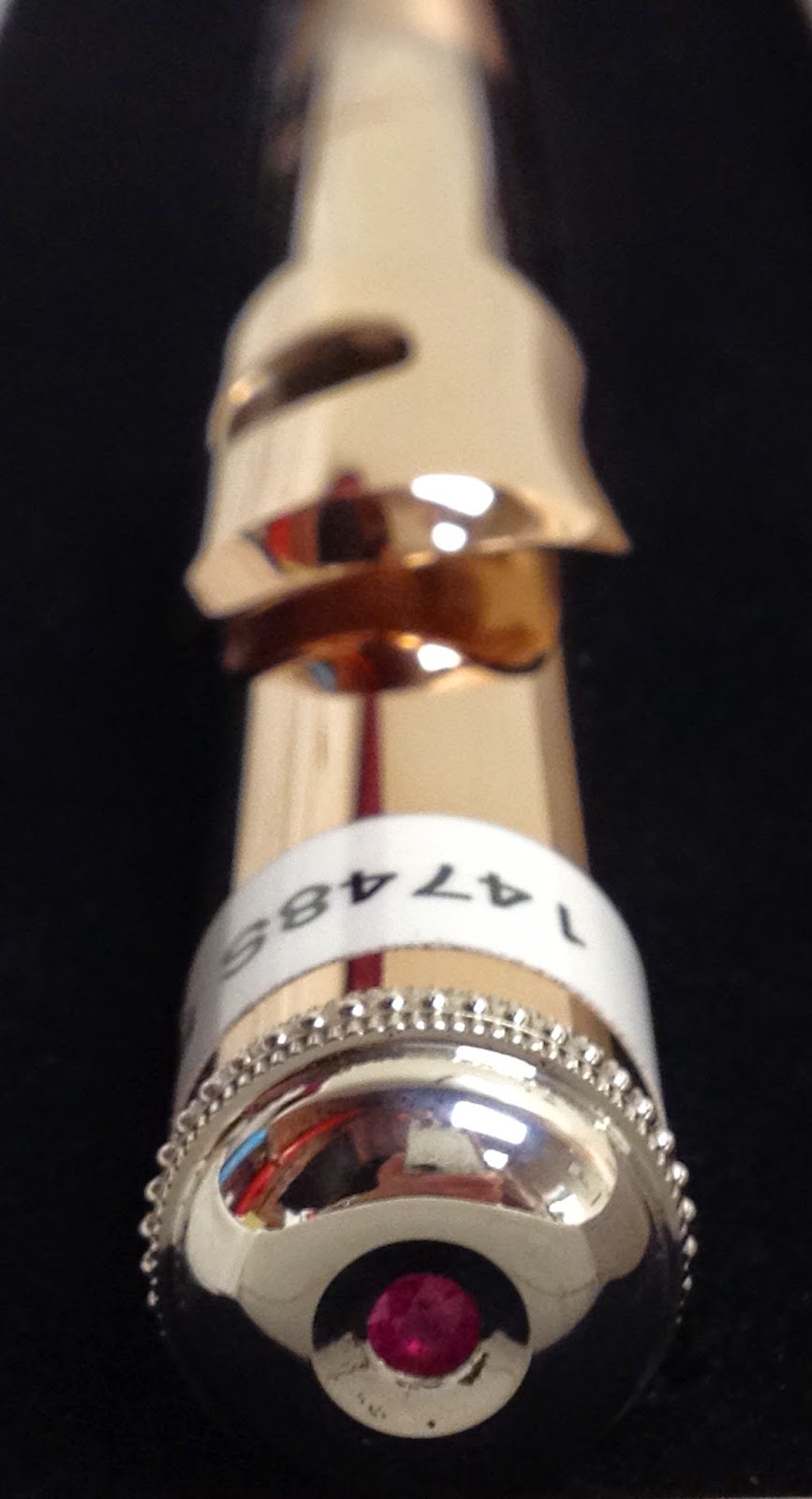 In a recent post, we shared a 1974 Powell pricelist (which you can view by following this link) and noticed that a "flute pin" was on the list.  We were very curious and had not seen any in the shop -- until now.  Powell's Repair Technician, Rachel Baker, had a customer who owned one of them!

Maureen McKibben came to the Powell shop in 1963 to purchase her Commercial model flute and received the pin as a souvenir of her visit.  This month, when she sent her flute in for regular maintenance, she included the pin for us to see.  The actual pin is about three inches long and is made of sterling silver.  As you'll see in the photos below, the flute on the front of the pin is quite detailed!  We would like to thank Mrs. McKibben for sharing this very special memento with us fifty-two years after she received it!

Posted by Powell Flutes at 3:11 PM No comments:


If you've attended a convention like the NFA, you'll know that the Powell booth is filled with many flutes, piccolos, and headjoints to try.  The selection is vast, and we certainly want visitors to try different things.  But have you ever found yourself selecting a flute and headjoint combination to try, only to discover that the headjoint would not fit into the flute?  If so, you may have had a combination of an Aurumite 14k Custom flute and a silver headjoint.

What is the reasoning behind the Aurumite 14k Custom flute having a .016" body and .014" headjoint?  It is actually the same as the case with the .018" silver Custom.  It's all about sound and response.  When the Aurumite 14k Custom was developed, different headjoint thicknesses were tested, and the best sound, resonance, and response came from choosing a .014" headjoint for the .016" body!

Posted by Powell Flutes at 10:33 AM No comments:

This week, we met with Powell sales associate Daniel Sharp to talk about crowns.  In his travels to flute fairs, he has been asked if Powell still makes the "original crown" or "old crown." So, what exactly is the design of the "original" or "old" crown? We discovered it was quite different than many flutists may be picturing...

Daniel shared that Verne Q. Powell modeled his earliest flute crowns after the Louis Lot crown.  In the photo below, we see the crown from Louis Lot #6412, made in 1898:


Taking a look at Powell #4, we can see the similarity: 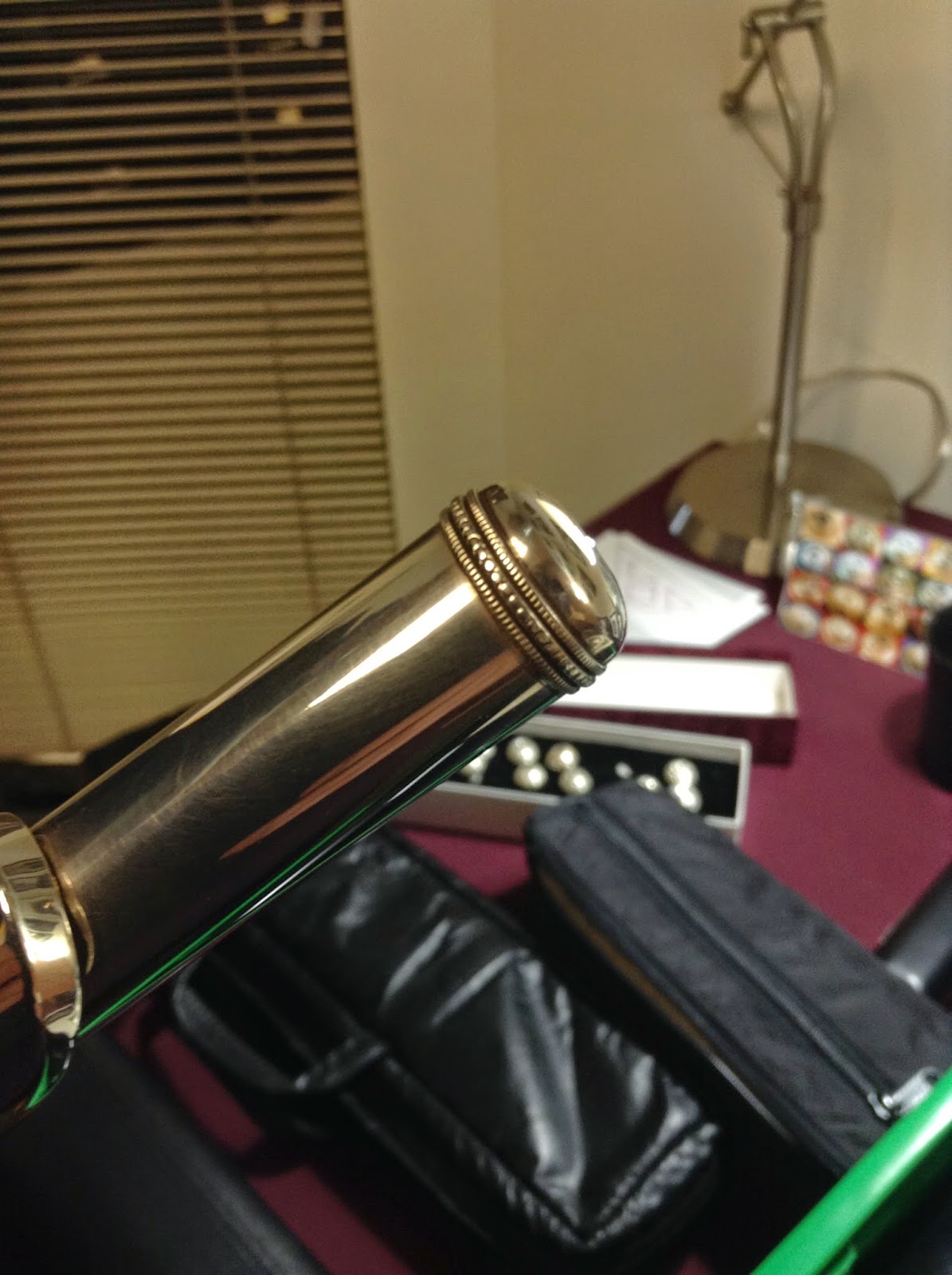 However, many flutists are familiar with a style of Powell crowns with two knurled rings, as shown in the photo below with Toshiko Kohno, former principal flutist of the National Symphony Orchestra.  Her flute was made in 1969. Although we do not have an exact date for when Powell began using this two-ringed design, we can tell that the design dates at least as far back as 1938.  In the photo below on the far left, we see a headjoint from 1938 with a lip plate engraved by Verne Q. Powell.  To the right of this headjoint are two recently made Powell Signature headjoints.  This two-ringed design is currently used on all Powell Signature headjoint crowns.  It is the design that most people are familiar with and consider to be the "original" or "old" crown. 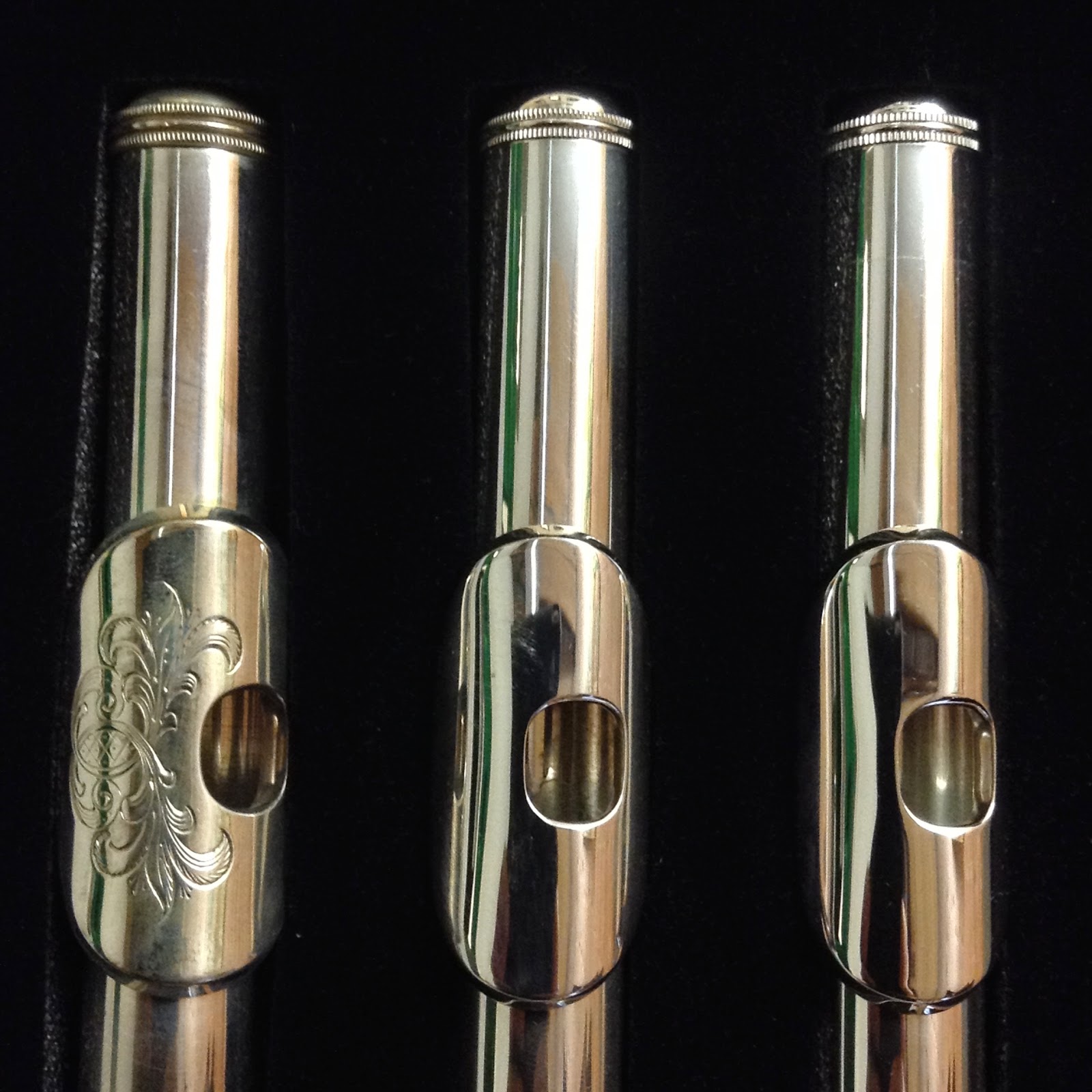 However, in the photo below, we see a Powell silver crown that is currently made for Powell Custom headjoints. 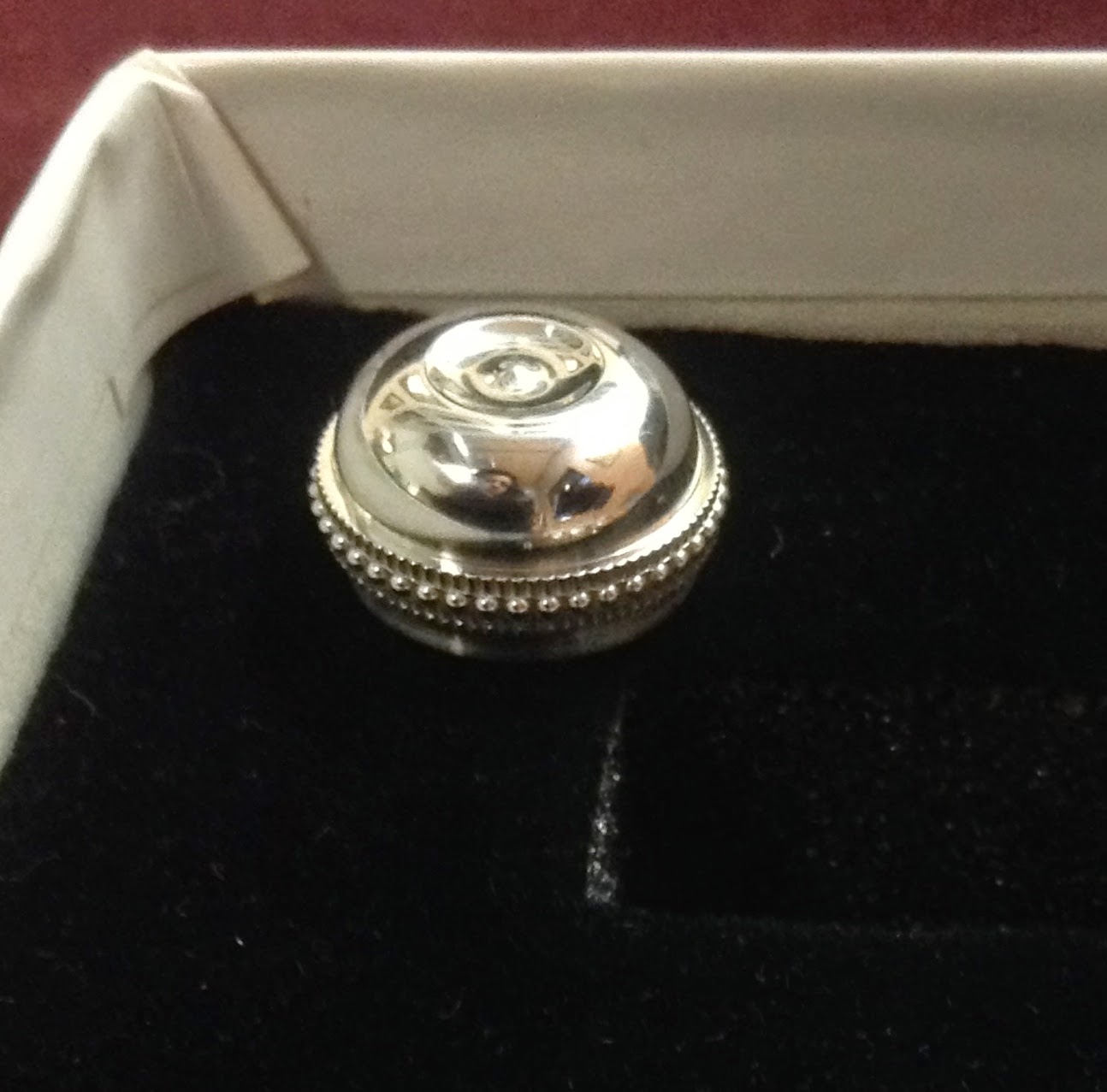 The final photo below shows the current silver Custom crown next to a current Signature crown (on the headjoint).  You'll notice the difference in the two crowns.  The current silver Custom crown resembles the earliest Powell crowns, and the Signature crown resembles the crown with two rings that many people recognize and consider to be the original design.  So, the answer is clearly, "yes!"  We still make the "original" style crown... 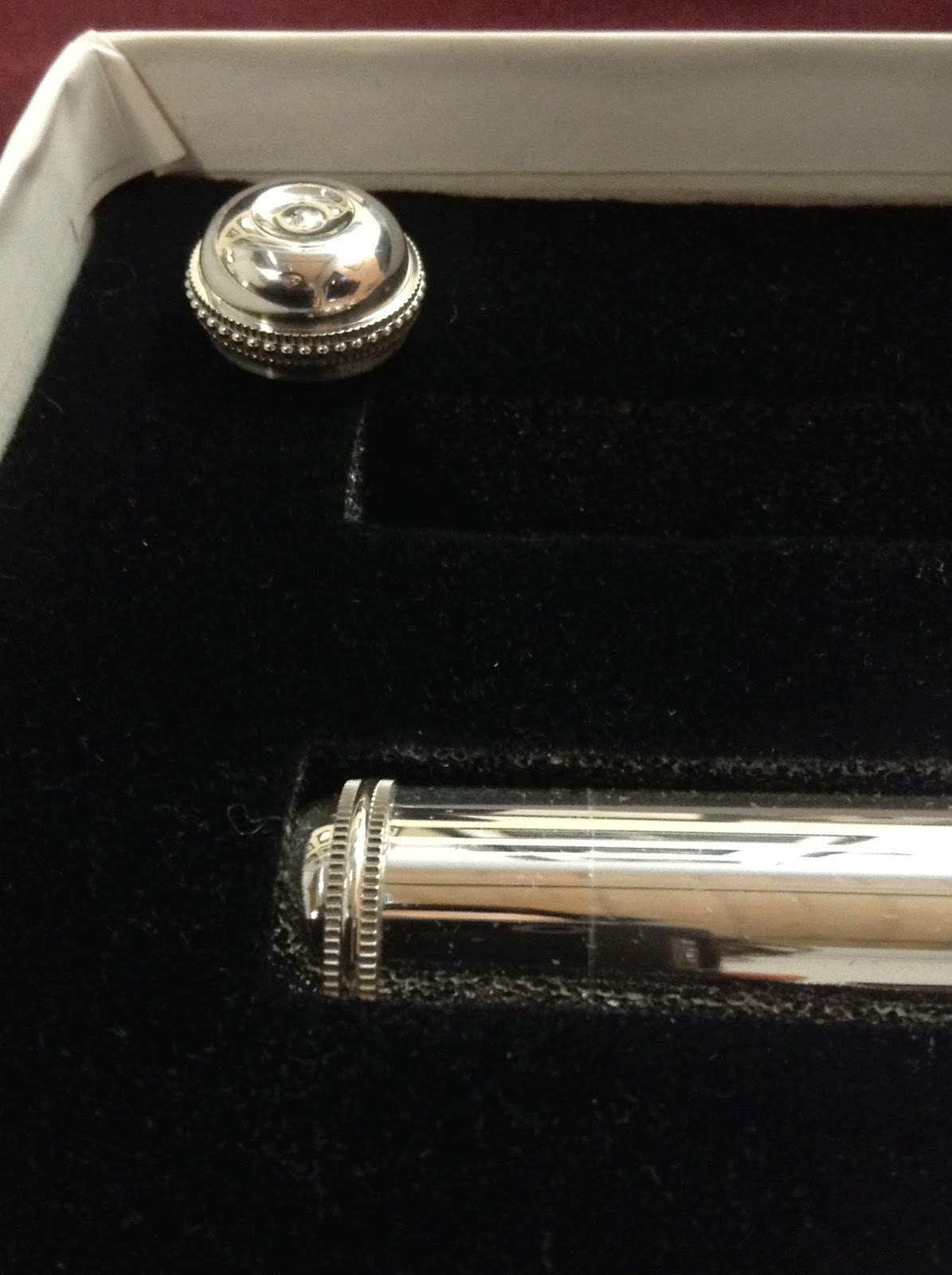 Posted by Powell Flutes at 11:50 AM No comments: