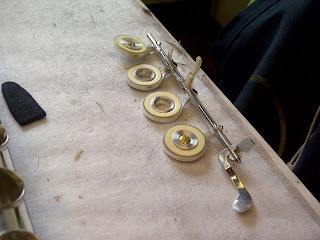 We stopped by flute finisher Lindsey McChord's bench this week and found her working with French bushings and key pad washers -- although they weren't in the key cups yet.  As you'll recall, French bushings help hold a French key pad in place.  For closed keys, a washer with a screw on top holds the pad in place.  We wrote a about bushings and washers in a previous post on our repair blog.  You can click here to read that earlier post.

So, if Lindsey hadn't gotten to the pad installation yet, what was she working on?  Well, before the pad installation, Lindsey prepares the bushings and washers.  By "preparing" them, she smooths the outside edge of each metal bushing and washer.  This step is critical, because if a bushing or washer is installed and does not have a completely smooth edge, it can snag and rip pads.  In the case of washers in particular, Lindsey told us that often times when you unscrew the pad screw (just above the washer), the motion of turning the screw to loosen it might cause the washer to turn as well.  If the washer does not have a smooth edge and then turns as the screw is loosened, the washer's edge might rip the pad.

With metal bushings and washers, Lindsey does a couple of things to smooth the edge.  She uses a mill file initially and lightly files all the way around.  She then takes a polishing compound and polishes the edge as well.  The polishing step helps provide an aesthetically-pleasing finished bushing or washer -- and it also serves as a final step to ensure that the edge is perfectly smooth!  Lindsey also ads a bit of melted wax to the inside of the bushing so that it will go smoothly on to the chimney of the key cup once the pad is in place.  With any rough edges smoothed away, there should be no snags in the next steps of padding the keys! 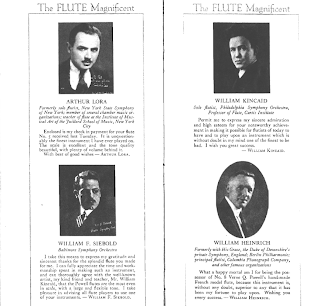 Continuing from last week's post on the first Powell players, we have numbers 6 -10 here.  These are the last of the group of "first players" who were included in the 1928 Powell brochure.  The artists' order in the brochure matches the serial number of the flute they owned.


I take this means to express my gratitude and sincerest thanks for the splendid flute you made for me.  I can fully appreciate the time and workmanship spent in making such an instrument, and can thoroughly agree with the well-known artist, my kind friend and teacher, Mr. William Kincaid, that the Powell flutes are the most even in scale, with a large and flexible tone.  I take pleasure in advising all flute players to use one of your instruments.


Permit me to express my sincere admiration and high esteem for your noteworthy achievement in making it possible for flutists of today to have and to play upon an instrument which is without doubt in my mind one of the finest to be had.  I wish you great success.


What a happy mortal I am for being the professor of No.8 Verne Q. Powell's hand-made French model flute, because this instrument is, without any doubt, superior to any that it has been my fortune to play upon.  Wishing you every success.


I have received your hand-made open G# French model flute.  I wish to congratulate you upon your capability in making such a fine instrument.  It is really the best I have ever used, and has everything a flutist would or could desire. 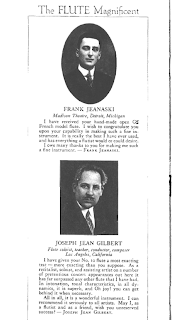 I owe many thanks to you for making me such a fine instrument.


I  have given your No. 10 flute a most exacting test -- more exacting than you suppose.  As a recitalist, soloist, and assisting artist on a number of pretentious concert appearances out here, it has far surpassed any other flute that I have had.  In intonation, tonal characteristics, in all dynamics, it is superb, and oh joy! You can get behind it when necessary.

All in all, it is a wonderful instrument.  I can recommend it seriously to all artists.  May I, as a flutist and as a friend, wish you unreserved success?

Posted by Powell Flutes at 12:52 PM No comments:

The First Powell Players - Part I 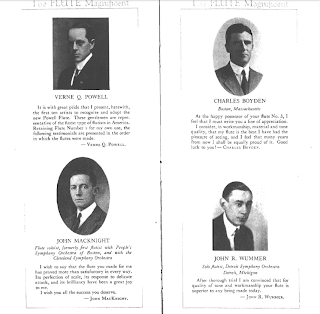 Have you ever wondered who the first flutists to play Powell were?  In the 1928 brochure, Verne Q. Powell included photos and quotes from the first ten flutists to play Powell.  We could compare the flutists in this section of the brochure to modern day "endorsing artists" who might be featured on a company's website, in ads, or in other printed marketing materials.  We will share the first ten players in a two-part post, beginning with the first five (as copied from the 1928 brochure):


It is with great pride that I present, herewith, the first ten artists to recognize and adopt the new Powell Flute.  These gentlemen are representative of the finest type of flutists in America.  Retaining Flute Number 1 for my own use, the following testimonials are presented in the order in which the flutes were made.


I wish to say that the flute you made for me has proved more than satisfactory in every way.  Its perfection of scale, its response to delicate attack, and its brilliancy have been a great joy to me.

I wish you all the success you deserve.


As the happy possessor of your flute No. 3, I feel that I must write you a line of appreciation.

I consider, in workmanship, material and tone quality, that my flute is the best I have had the pleasure of seeing, and I feel that many years from now I shall be equally proud of it.  Good luck to you!


After thorough trial I am convinced that for quality of tone and workmanship your flute is superior to any being made today.


Enclosed is my check in payment for your Flute No. 5 received last Tuesday.  It is unquestionably the finest instrument I have ever played on.  The scale is excellent and the tone quality beautiful, with plenty of volume behind it.

With best of good wishes,

Posted by Powell Flutes at 1:33 PM No comments:

What’s in a name?  In this case a lot, but the name itself is something we just made up because it sounded like fun.

Zinki is the name we’ve given to Powell’s patented process for extruding tone holes on one of our CNC machining centers.

The traditional process for extruding tone holes generally involves at least 3 separate steps, each one involving a different setup on a different machine, as follows:

1.      Make a small hole in the tube where the tone hole is going to be.  Usually this involves drilling or punching an egg-shaped hole.
2.      Load solid pulling balls into pockets in an arbor, then slide the flute tube over the arbor and place on a machine.  Position dies over each tone hole.  Connect a spinning shaft to the pulling ball and pull up through the die, pulling flute tubing with it to form the tone hole.

3.      Remove the tube from the pulling arbor and place it on another machine.  Face each tone hole level with a cutting tool, then use a special tool to roll over the tone hole edge to (a) eliminate the sharp edge and (b) reinforce the tone hole.
The process normally takes 30-45 minutes and uses both extrusion - a brute force technique - and spinning to form the tone holes.  The force required has a tendency to pull metal from the tube into small ripples alongside the tone holes.  And each time a flute tube goes from one setup to another, accuracy is lost.

Powell’s Zinki technology delivers the pulling ball from the outside of the flute tube, rather than pre-loading it on an arbor inside the flute tube.  In order to do this Powell needed to figure out how to put a big ball through a small hole.  Instead of a single large ball, the Zinki pulling ball is actually a series of small balls which can expand and contract. The details can be viewed at U.S. patent #7,420,109B2.

With Zinki the balance between extrusion and spinning shifts to spinning.  The result is a highly accurate tone hole with little if any rippling on the tube.  The last step in Zinki is to “kiss” the top of the tone hole with a diamond facing tool to make sure that it is level.  And all this takes place in a fraction of the time for traditional tone hole extrusion.