Is it possible to customize your flute with some optional features after you've purchased it?  The answer would be a solid "maybe," depending on the flute.  Each flute must be analyzed on a case-by-case basis.  Here at Powell, there are some options that can be added after the flute has been purchased.  Regardless of whether you have an in-line or offset G, there are certain options that are available.  For a C# trill or split E, the flute would have to be analyzed by the repair tech to see if it would be possible to add these.

There are a couple of options that are definitely possible, such as a G disc, which can always be added.  If you are interested in adding a B foot or C foot, that is available as well.  You can order a B or C foot, and it will be made in the shop.  You could even choose a different metal if you would prefer.  You would need to send your entire flute to the shop to have the new B or C foot fitted to the instrument.  Also, a D# roller could be added, although it would have to be an "enclosed" roller (as seen in the photo on the right).


Customizations can always be considered for Powell Signature, Conservatory, and Handmade Custom flutes.  Unfortunately, there are certain models that we are not able to customize after purchase, including Powell Sonaré models, the Powell 2100, and the Powell 3100.  Options are not available on the Powell Sonaré flutes because the mechanism is different from a Powell custom, and the keys are plated.  The 2100 and 3100 also have mechanisms and key shapes of a much different design than a traditional Powell model.  Powell aftermarket options are only available on Powell flutes and not on other brands, unfortunately.  If you are considering an after market customization, make sure to contact our repair technician to see what might be possible.  Our technician, Rachel Baker, can be reached at rbaker@powellflutes.com.
Posted by Powell Flutes at 2:31 PM No comments:

Flutes have come a long way in the last 100 years, yet many musicians prize old Louis Lot, Haynes, and Powell flutes.  Flute scales are better today, precision machining produces superior parts, synthetic pads are more stable, and silver is silver – or is it?  Does something happen to silver over time that could have a beneficial effect on sound?  In fact silver does change over time.  It stress relieves and age hardens.

When any metal is worked, such as by cutting, extruding, or bending, it becomes stressed.  In its “relaxed” or unstressed state, the molecular structure of metal looks something like graph paper, with a nice, regular geometric structure.  When the metal is stressed, some of those boxes get scrunched up, and some become bigger and misshaped.  As a result of these irregularities the metal is unable to vibrate as freely as it would do in its pure, unstressed condition.  These irregularities can cause dead spots in a flute.  In our experience resonance is better with silver that has been stress relieved.

Hardness correlates with stiffness or rigidity.  When metal flexes it absorbs or diffuses energy.  Since flutes are very inefficient at converting your air into sound, small differences in how that air energy behaves can affect acoustical output.  We believe that the slight age hardening of older silver flutes has a positive effect on response.

Does anything else change over time with older silver flutes?  Well, yes, the instrument is subject to daily vibration from being played and is swabbed.  We cannot document what effect, if any, might arise from these activities, but some flutists are convinced that they make a difference.

Is there a way to produce some of the effects of aging on silver in new silver flutes?  Yes.  At Powell we use a variety of techniques to keep the molecules of the flute body as even as possible.  When we solder we generally heat the entire body at once, evenly, rather than spot soldering one location at a time.  And when we’re done, we cryogenically treat the entire flute.  There is solid documentation that cryogenic treatment age hardens and/or stress relieves certain metals, but data for the effect of cryogenic treatment on sterling silver are inconclusive.  Based on years of subjective testing we believe cryogenic treatment stress relieves silver and slightly age hardens it.

Some of the qualities of older flutes may also be perceptual rather than real.  A number of years ago one of our customers was complaining that new Powell flutes did not have cups properly centered over the tone holes.  I was surprised because we use gages that are accurate to within the thickness of a human hair.  Then this customer came with Powell flute #2000 made by “Mr. Powell” which he proudly showed me.  As I looked at this flute I noticed that the trill cups were severely bent – nearly 1/8”.  Apparently when Mr. Powell made this flute the trill cups were not centered properly.  Rather than re-make the keys he simply bent them so that they covered the tone holes.  When I pointed this out to the customer he was shocked.  He somehow noticed if our new flutes cups were off center by 0.003”, but never noticed that the trill cups on Powell #2000 were grossly off center.

Beauty is in the eye of the beholder.  We have thought about the way flutes age and have tried to mate a process for aging the flute with modern elements like improved scale and keys.
Posted by Powell Flutes at 4:59 PM No comments:

One part of the manufacturing process that is extremely critical is the final testing.  Here at Powell, this is done by Rebecca Eckles, our Director of Quality and Service.  Rebecca wears many hats and is a professional flutist as well.  After the flutes are completed by the finishers, they are sent to Rebecca for testing.  She tests all the flutes and Signature piccolos.  When she receives them, they still have the protective blue film covering the body, headjoint, and keys.  Rebecca begins by checking the complete mechanism from bottom to top.  She presses each key, making sure the mechanism is smooth with no drag, no binding keys, and proper spring tension.  She also checks for lost motion and any sharp edges.  After this manual test of the mechanism, she completes a "visual check" in which she looks at key heights and padding, making sure everything is even and at the proper height.  She also inspects the corks to make sure they are well shaped and free of imperfections.

Rebecca then begins a play test.  This time, she starts from the top down to check for any leaks.  She then takes the feeler gauge to each pad as an additional measure to identify any leaking pads.  When her evaluation is complete, she submits her recommendations.  If there is anything that needs to be corrected, it goes back to the finishers.  The flute then rests for a few days, and she retests it.  Rebecca also works with the repair technician, and when everyone is in agreement that the flute is ready, it is shipped to the customer.  Regardless of the model (Signature, Conservatory, or Custom), Rebecca believes that they must all look and sound like custom flutes.  She also stresses that the finishers are master craftsmen -- their work is what makes everything work well by the time it arrives at her office.

These are photos of two sterling silver pieces which have been joined using two different techniques.  The photos were done at MIT using an electron microscope. 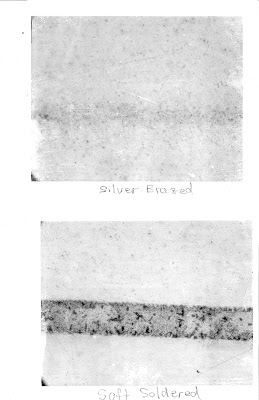 Does this affect sound?  Yes!  The high temperature silver braze inter-diffuses into the sterling silver, and the result is a piece of metal that acts as if it were a single piece of metal.  The low temperature solder acts more as metal glue and sits in between the two layers of metal.  In my experience vibration and resonance are superior when only a single, homogenous metal is involved.  With the low temperature joint the solder layer can act as a barrier to the transmission of vibration and can dampen response.