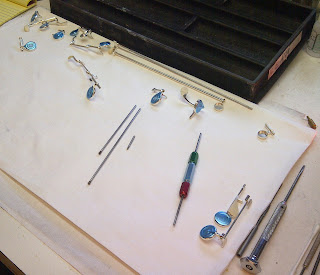 One of the tasks that our flute finishers have is that of fitting keys.  The mechanisms involve several parts that must fit together in order to function properly, so the keys need to be "fitted" first.  Fitting keys takes several steps, but we had a chance to catch up with flute finisher Lindsey McChord to talk about some of the very early steps in the process.

Lindsey begins by taping the keys so that they do not get scratched in the finishing process.  Then, Lindsey begins the key fitting process by checking the mechanism tubing on each key.  When the key mechanism is assembled, a steel rod (or "steel" as it is commonly called in the shop) runs through the inside of the key mechanism tubing.  In order for the keys to move smoothly on the steel, the inside of the tube must be a perfect cylinder.  Sometimes, the inside of the tube still needs a bit of tweaking when it arrives at the finisher's bench.  So, a small gauge that looks like a double-ended screw driver is used to check the inside of the mechanism tubing.  This gauge is referred to by finishers as the "go/no go gauge."  This gauge has a green end and a red end.  If the green end of the gauge fits smoothly and evenly into the mechanism tubing, the key is a "go" and does not need any further work.  If the green end does not go in smoothly, there is a problem at hand.  If the red "no go" end goes into the tubing, the key is overly reamed and must be returned to the stringing department (which supplies key mechanism components to the finishers).

The "go/no go gauge" is used in a few different ways to help determine what might need to be adjusted on a key's mechanism tube.  If the green end goes in smoothly at both ends of the tube, the key is "good to go."  If it does not go in at all, or if it is extremely difficult for it to go in, the mechanism tubing needs to be reamed.  When reaming the tube, material is removed from the inside so that it is smooth and cylindrical, with an even diameter throughout.  If the gauge goes in but feels a little loose or a little tight in one area of the tube, the tube is "spun" by the finisher -- which is essentially a step used to even out the inside of the tube.

To spin and ream tubes, the finisher uses the bench motor with a steel that has a flat end and a pointed end.  To ream a tube, the steel is placed in the bench motor with the pointed end facing outward.  The motor is turned on, and the reaming tool spins very quickly.  The finisher runs this reaming tool through the tube to remove excess material inside.  A very straight motion is used in the reaming process.  In the "spinning" process, which evens out the inside of a tube, the same steel is placed in the bench motor -- but the flat end of the steel is facing outward.  The key is place on the steel, and the motor is turned on.  The finisher is then able to grab the end of the steel and "spin" it in a circular motion to even out the inside of the tube.  The finisher may use a tissue or paper towel to grab the end of the steel so that s/he does not hurt her/his hands.

There are several additional steps to fitting keys, but checking the mechanism tubing to make sure the steels run through smoothly is one of the first steps to key fitting.  Stay tuned for future posts as we explore more on the topic of key fitting.

Posted by Powell Flutes at 2:35 PM No comments:

This year marks the 10th anniversary of the 19.5K Rose Gold Handmade Custom Flute, which was introduced to the public in a very special event at the Harvard Club in Boston on June 7, 2003.  The special black-tie event at the Barlett Room of the Harvard Club featured French Music performed on the new 19.5K flute by Powell Artist Paul Edmund-Davies.  When it was introduced, the 19.5K Custom was available with a 19.5K body and 14K mechanism or a 19.5K body and silver mechanism.  The model with the 14K mechanism was priced at $29,800, and the model with the silver mechanism was priced at $20,100.  In its first year on the market, the 19.5K came in a handmade French-style Moroccan leather case and special accessories designed by Wirkkala designs, including a hand-carved wooden swabstick, a flute mat, flute cover, and a Cross pencil.  The flute and accessories were all presented in a velvet drawstring pouch. 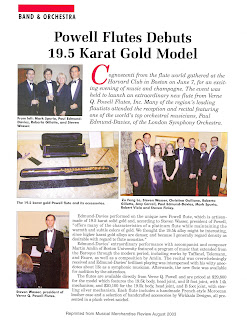 Powell was the first flute maker to offer the 19.5K gold, and Powell's President, Steven Wasser, felt the new gold option offered "many of the characteristics of a platinum flute while maintaining the warmth and subtle colors of gold."  The 19.5K joined a list of metal options for Powell Handmade Custom flutes, which in 2003 included silver, 10K gold, 14K Aurumite, 14K gold, and platinum.  Introduced with two metal options for the mechanism in 2003, today's 19.5K is available with a sterling silver, 10K yellow gold, or 14K rose gold mechanism.  As the price of precious metals has increased since 2003, the price of a 19.5K today would be quite different than it was in 2003.  You'll want to check with your local Powell dealer for exact pricing, although today's prices for the 19.5K would range from around $39K to $59K, depending on options.  If you're in the market for something of 19.5K gold but aren't quite in the position to get a flute, Powell does offer (as with all their metal options for bodies) the headjoint only.  If you've never tried a 19.5K Powell, you should!  Check it out -- it may be the perfect flute for you... 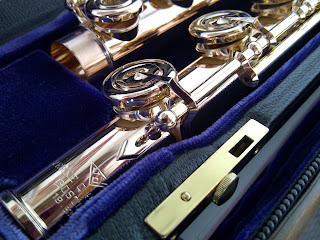 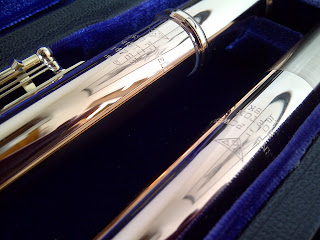 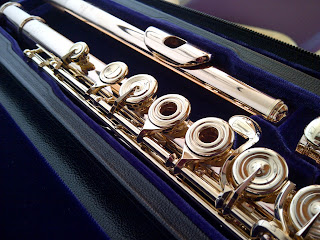 Posted by Powell Flutes at 4:42 PM No comments:

One of the most popular features on the Powell Flutes website is the online version of the "Powell Bible."  You can find it at http://www.powellflutes.com/qclub/bible.  All you have to do is enter a serial number, and you will find specs on the instrument -- including options and the year it was made.  This part of our website is quite handy for a number of reasons, especially as a starting point for the appraisal process (which you can also do on the website at http://www.powellflutes.com/qclub/appraisal).  Whether you are looking to purchase a new flute, searching for more information on an older Powell, or just curious, the Powell online Bible is a terrific resource.

The original "Powell Bible" exists in several volumes at the Powell office.  In 2007, the hard copy files were converted to an electronic file, which now serves as the foundation for the searchable database on the Powell website.  Unfortunately, there were large portions of missing information in the hard copies, so if you come across information in the online Bible that you believe is incorrect, please do let us know.  You can contact our Marketing Manager, Christina Guiliano-Cobas, at cg@powellflutes.com.

Posted by Powell Flutes at 2:31 PM No comments:

We've come across several historic documents pertaining to Verne Q, Powell, including the very first brochure from his shop on Huntington Avenue, details on design, and of course, the story behind his very first flute.  This week, we've come across something particularly special in terms of history -- Verne Q. Powell's autobiography.  The exact date when it was written is unknown, but it was truly handwritten (in cursive) by Mr. Powell.  We hope you'll enjoy the transcription below:

Verne Q. Powell learned to play the ocarina at 8 years of age.  At 10 he graduated to the fife and started a drum corps with Bert Anthony (a nephew of Susan B Anthony, the founder of women’s suffrage) and Ron Bates, the best drum major he ever knew.  His baton was a croquet ball on a broom handle.  This was the fall of 1888, the Harrison-Morton campaign, and this trio snuck out evenings and paraded down town on Sat evenings to the amazement of the public.


About this time an older friend took him to hear the first Edison record machine because it had a piccolo record, so now it had to be a piccolo, so older brother Will went to Lyon & Healy and got a six keyed piccolo which cost $3.40 and Verne says he shined his brother’s shoes for the rest of his life to pay for the piccolo.  Then he organized a real drum corps of 6 piccolos, 6 snare drums, bass drum and the same drum major.  They played for all the ball games, etc., just for admission.


At 14 he was learning to make jewelry with his older brothers and he made a 6 keyed piccolo from a piece of a brass chandelier which he could play.


When 17 he bought his first Boehm flute from an Elkhart firm, paying for it on the monthly payment plan and using it as best he could.


About 1910 he went to Chicago to take some lessons from Alfred Quensel (1st flute with Theodore Thomas) and while there heard for the first time George Barrére with Damrosh.  Barrére played on a silver flute which was then called “tin-whistle” but Verne was so thrilled with his playing that he made up his mind to make a silver flute for himself.  So when he returned to his home in Fort Scott, Kans, and his brothers jewelry store, he proceeded to gather up the scrap silver which consisted of 7 teaspoons, 3 silver watches and some plugged silver coins, melt them down and make a silver “tin-whistle” for himself.  He has it now and always will keep it.  It is a rather crude affair but it plays well and many have played and liked it.


It was this event that eventually brought him to Boston with the Wm. S. Haynes Co.  He was with them ‘till 1913[1] when he left and started in for himself.


Being a talented flutist with his creative ability in working precious metals, he has been able to produce flutes of silver, gold and platinum for the world's greatest artists.

Posted by Powell Flutes at 12:56 PM No comments: