Excerpt on Headjoints from "High Flutin' " 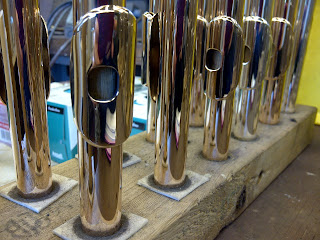 Ed Machon had a 32-year career at Verne Q. Powell Flutes, beginning in 1949 at the original shop location at 295 Huntington Avenue in Boston  He ultimately became president of the company, and in 1961, he and partners Richard Jerome, Elmer Waterhouse, and Edward Almeida purchased the company from Verne Powell.  His book, High Flutin', captures many stories from his time at Powell -- shedding light on the atmosphere, personalities of customers and workers, and (of course), flute making techniques of the time.  In the excerpt below, we read a bit more of his thoughts on headjoints...


"The headjoint is 90% of the flute."  How often did I hear those words from the old man?  I do not know how it affected the rest of the flute makers, but I felt what in the hell is the use of making sure all the adjustments were correct, keys were straight, bearing surfaces were reamed right on, and, in general, it looked like a Powell should.  After all, the work I did represented a mere 10% of the flute.

Headjoints are a funny thing, and they all have one thing in common -- they play.  Some better than others, but they all play.  I have seen some embouchure holes that resembled a bath tub -- all out of proportion to our specifications.  They were okay when they left, but some flute players and would-be makers when armed with a knife, are down right dangerous.  The process of using a knife to carve out more of the hole is called "freeing up" and making the flute more responsive.  Usually, the artisans, or as we call them, blacksmiths, went too far.  At that point, a new headjoint is in order.  Next to a knife in the hands of a flute player, a screwdriver is the most dangerous weapon.

Somewhere in the 1960s, several flute players in California began ordering the "Cal Style Head" or Roger Steven's specs on the cut of hole and height of wall.  After several of these went our and seemed to please all who received them, I received a call from Roger asking, "What the hell is the Roger Stevens head?"  He had 3 or 4 Powells with wall heights from about .185 to .203.  Just about the time this fad was at it's height, we had a flute of his in for repair which had the .203 wall.  That's how it all got started.

Sam Most, a most respected jazz flutist, sent a flute in once for repair.  I swear, the embouchure hole was done with a drill just about the right size.  No undercutting -- a real sharp edge.  That man can really play jazz.  Undoubtedly, someone else could end up with no sound at all with it.  To each his own.

When I went to work for Powell in 1949, the trend was to lower walls.  A wall height of .185 was average.  This was probably due to the influence of Laurent, BSO Principal for years.  I do not recall any radical changes, or special heads other than the one for Harold Bennett, or one of his students.  He played on a .212 wall as did most of his students.  I heard in later years, many years, that if VQP made a head for you, you took it and did not complain.  The only complaining was done out of ear shot.

One thing, among many, I could not understand was some teachers insisting a student order a head with the same specs as the teacher.  This does not make any sense to me.  In the course of 4 or 5 years, you may have 2 or 3 teachers.  No way are they all going to have like headjoints.  Imagine someone with a mouth like Joe E. Brown (it looked like a torn pocket) ordering for a sweet young miss with a mouth resembling a tiny rosebud.

Further, on the matter of heads -- I always stressed the importance of people who picked up flutes at the shop, not to grab across the lip plate when putting the flute together.  This can cause a ridge in the plate which is very difficult to remove.  I don't think some of them heard me because they still came back with the ridge.  Oh well, I tried.

Posted by Powell Flutes at 5:27 PM