1987 was a very special year for Powell as it marked the company's 60th anniversary.  It also brought about a change in leadership as Steven Wasser purchased the company.  Wasser became the company's President, which is the position he held from that year to the present.  Looking through our archives, we discovered the brochure and pricelist from 1987, which Mr. Wasser told us was the very first one he designed.

So, what products were available 26 years ago?  There were flutes, piccolos, and headjoints -- each with different options.  For flutes, one had the option of a Custom flute or a Conservatory.  The Custom flutes were the "7000 Series" Handmade flutes.  They were available in sterling silver, Aurumite™ I, Aurumite™ II, 9K gold, 14K gold, 18K gold, and platinum.  The Conservatory flutes were sterling silver and had standard features of .018" tubing, drawn tone holes, and Y arms.

There were two models of piccolos and two styles for headjoints.  For piccolos, the "Traditional" and "Contemporary" models were both made from grenadilla wood and had sterling silver mechanisms.  The Traditional model had a cork-fit tenon joint, and the Contemporary model had a silver-to-silver tenon fit.  The Contemporary model, similar to today's Custom piccolo, had hard rubber bushings inset to each tone hole.  Headjoints were available in the Standard Model and Modern Undercut styles.  The Standard headjoint was patterned after those made by Verne Powell late in his career, and the Modern Undercut had a smaller embouchure hole with slight undercutting on the sides.

Aside from the product offerings, we can also see from the brochure that the Powell company was located in Arlington, Massachusetts.   The 1987 pricelist and brochure are featured below: 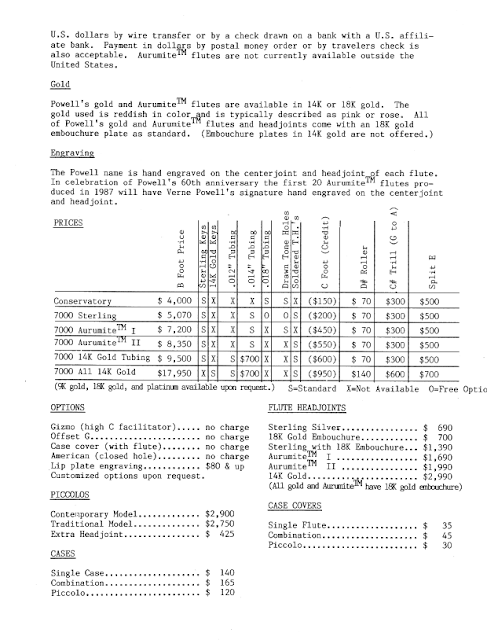 Outside of the tri-fold brochure: 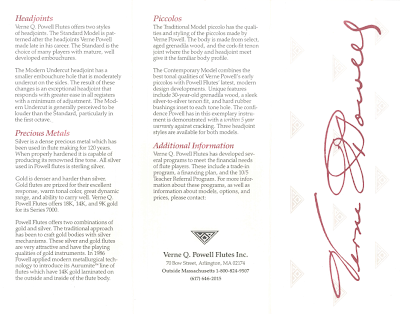 Inside of the brochure: 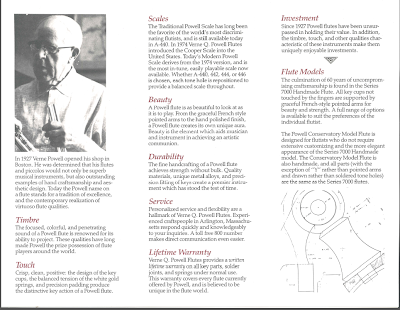