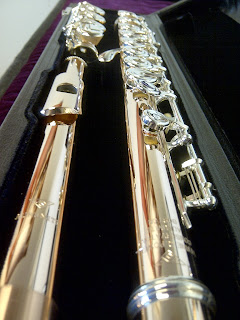 For Powell Flutes, the year 2002 was a celebratory one as the company marked its 75th anniversary.  A limited edition 75th Anniversary Custom model was launched, and the Conservatory Flutes went through a complete transformation.  In 2002, the 2100 and 3100 Conservatory models were redesigned and renamed as, simply, the Handmade Conservatory models.  The new Handmade Conservatory flutes were available in silver (previously the 2100) and Aurumite 9K (previously the 3100).  You can see examples of the design changes in a previous post at http://www.flutebuilder.com/2013/03/the-2100_10.html.  The very first shipment of Handmade Conservatory flutes in 2002 had a very special destination, which we discovered when we recently came across the original text for the 2002 press release:

Maynard, Massachusetts - Verne Q. Powell Flutes, Inc.  has announced the introduction of a new line of flutes in the Handmade Conservatory model.  The flutes come in two versions -- all sterling silver, and Powell's patented Aurumite 9K body with sterling silver mechanism.  The models were developed last year in response to a request for a handmade flute with traditional aesthetics, but with the unique Posi-Stop tail design of the former 2100 flute, according to Roberta Gillette, Powell's Marketing Director.  The first shipment of the First Handmade Conservatory silver flute coincided with an emergency order request from one of our dealers, Washington Music, in suburban Washington, D.C. for a flute to be played in the President's Band for a White House function the following day.  It so happened that the first flute produced in this new line became destined for a White House debut.  Congratulations to Washington Music for facilitating the introduction of the new Handmade Conservatory line in the first house of the land.

The new Handmade Conservatory flutes feature A-442 or 444 pitch, the Modern Powell Scale, 14K white gold springs, extruded tone holes, and handmade custom Powell headjoints with .016" tubing thickness.  Inline or offset G is available at no extra cost.  The flutes come in a cherry wood case with a leather case cover.  A half-offset G model with E mechanism in A-442 is also available.  For more information, visit www.powellflutes.com.