Closer Look at the C# Trill 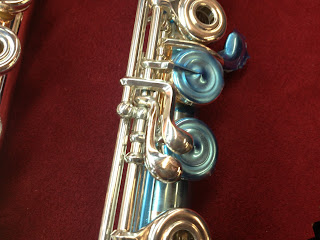 Often times, we have customers ask if a C# trill can be added to their flute as an aftermarket customization.  It can get pretty tricky since this type of customization would require an extra tone hole to be put in the flute -- which changes the body, which can change the response and sound, and...  Well, the list goes on.  It's more complicated that just adding a key.  So, we began wondering about other differences between flutes with and without a C# trill key.  We stopped by flute finisher Karl Kornfeld's bench just as he was working on a Powell Conservatory with a C# trill.

We took a series of photos which you will see below to illustrate the differences.  Flutes with a C# trill are very easy to identify -- you can clearly see the C# trill key next to the Bb shake.  If you look a little more closely, you'll begin to notice a few more additions to make the C# trill function properly.  Beginning with the back of the flute, you will notice an extra tone hole (and key cup) next to the thumb keys.  Looking at the front of the flute, you can see a couple of additions to the mechanism.  First, the C# trill key requires an extra mechanism tube.  This extra tubing needs to be stabilized so that it does not bend -- so, there is an extra cradle for the tube.  There is also an extension on the post at the end of the tube, which is actually one piece.  Finally, because there is an extra key on the flute, the key requires an extra adjustment for key height.

So, as we can see, the C# trill adds more than just a little key to the mix.  Obviously, the tone hole for the key is made along with all the other tone holes during the body fabrication process.  As noted above, flutes with a C# trill require several additional parts for the mechanism.  If you have a C# trill key on your flute, or if you are looking at flutes with a C# trill, take a closer look -- you'll see more than just a key!

Posted by Powell Flutes at 4:54 PM