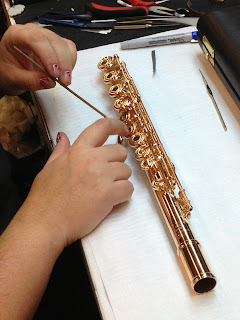 Last week, we took a closer look at a flute with a C# trill and the extra part of the mechanism that was built on to the flute for the key to function.  We stopped by the finishing area this week and spoke with flute finisher Cynthia Miguel Targa.  Cynthia was finishing a 19.5K Powell Custom with 14K keys.  The flute she was finishing also had an offset G and split-E.  Much like the flute with the C# trill, the flute with the split-E had an additional part to the mechanism as well.  For the split-E to function, an extra mechanism tube is added -- but this tube is hollow (you will see it in the photos below).  You can tell that the tube is hollow because there are no posts at the end.  Posts would have screws in them as well.

So, if you have an inline flute with no extra options like a C# trill or split-E, you will see two long mechanism tubes.  There will also be separate tubing for the thumb keys and the G# (as mentioned).  If you do have options, take a closer look -- you'll see some of the extra parts of the mechanism for yourself!