The following brief autobiography was hand written by Powell himself. Its transcription reveals Verne’s interest in flutes from an early age, and his ingenuity and determination to craft instruments.

Verne Q. Powell learned to play the ocarina at 8 years of age.  At 10 he graduated to the fife and started a drum corps with Bert Anthony (a nephew of Susan B Anthony, the founder of women’s suffrage) and Ron Bates, the best drum major he ever knew.  His baton was a croquet ball on a broom handle.  This was the fall of 1888, the Harrison-Morton campaign, and this trio snuck out evenings and paraded down town on Sat evenings to the amazement of the public.

About this time an older friend took him to hear the first Edison record machine because it had a piccolo record, so now it had to be a piccolo, so older brother Will went to Lyon & Healy and got a six keyed piccolo which cost $3.40 and Verne says he shined his brother’s shoes for the rest of his life to pay for the piccolo.  Then he organized a real drum corps of 6 piccolos, 6 snare drums, bass drum and the same drum major.  They played for all the ball games, etc., just for admission.

At 14 he was learning to make jewelry with his older brothers and he made a 6 keyed piccolo from a piece of a brass chandelier which he could play.

When 17 he bought his first Boehm flute from an Elkhart firm, paying for it on the monthly payment plan and using it as best he could. 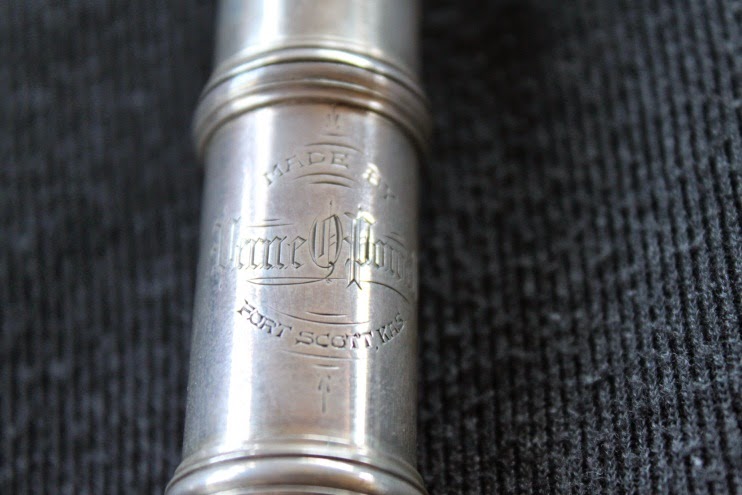 About 1910 he went to Chicago to take some lessons from Alfred Quensel (1st flute with Theodore Thomas) and while there heard for the first time George Barrére with Damrosh.  Barrére played on a silver flute which was then called “tin-whistle” but Verne was so thrilled with his playing that he made up his mind to make a silver flute for himself.  So when he returned to his home in Fort Scott, Kans, and his brothers jewelry store, he proceeded to gather up the scrap silver which consisted of 7 teaspoons, 3 silver watches and some plugged silver coins, melt them down and make a silver “tin-whistle” for himself.  He has it now and always will keep it.  It is a rather crude affair but it plays well and many have played and liked it.

It was this event that eventually brought him to Boston with the Wm. S. Haynes Co.  He was with them ‘till 1926 when he left and started in for himself.

Being a talented flutist with his creative ability in working precious metals, he has been able to produce flutes of silver, gold and platinum for the world’s greatest artists.