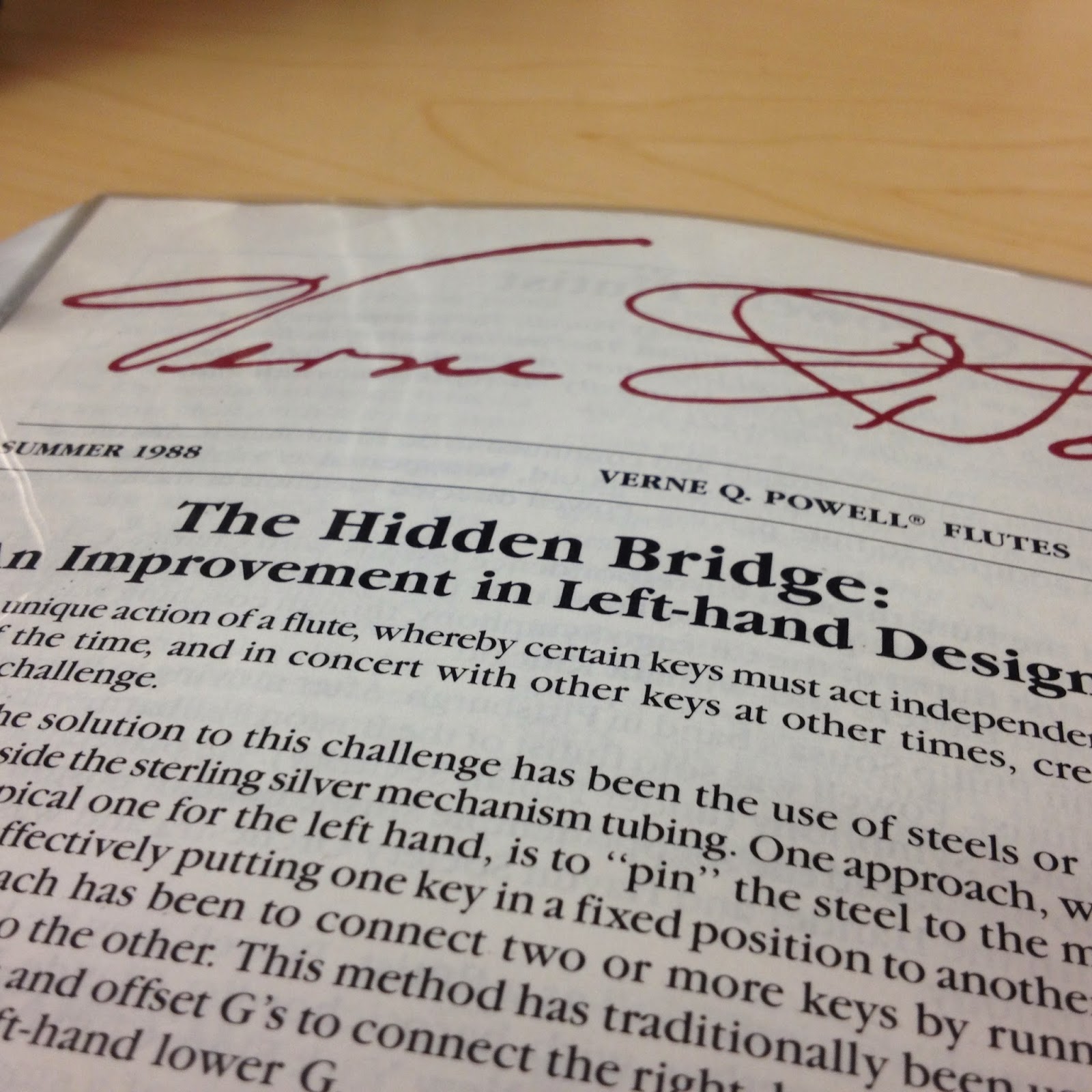 Looking through our archives, we came across the Powell Flutes newsletter from the summer of 1988.  The pinless bridge in the left hand, introduced 26 years ago, is a precursor to today’s elegant and functional pinless mechanism.  An excerpt from the 1988 newsletter article highlighting the new design is below:

The Hidden Bridge: An Improvement in Left-hand Design

The unique action of a flute, whereby certain keys must act independently some of the time, and in concert with other keys at other times, creates a design challenge.

Part of the solution to this challenge has been the use of steels or rods which run inside the sterling silver mechanism tubing.  One approach, which is the most typical one for the left hand, is to “pin” the steel to the mechanism tubing, effectively putting one key in a fixed position to another key.  A second approach has been to connect two or more keys by running a bridge from one to the other.  This method has traditionally been used for flutes with split-E and offet G to connect the right-hand E with a lever that operates the left-hand lower G.

Each approach has advantages and problems.  Mechanically, the bridge is a more secure device.  However, bridges are cumbersome to build and do not have the delicate appearance of nearly invisible pins.

Powell’s design of choice for 62 years for the left hand has been to use pins.  After Powell’s craftsperson has pinned and adjusted the left-hand mechanism, it is both effective and attractive.

The practical mechanical limitation of pins for the left hand occurs when a flutist desires a split-E in conjunction with an in-line G.  Several Japanese flutemakers began using a bridged left-hand section for split-Es around 1980.  Powell constructed a left-hand bridge on two flutes during the last three years.  While the bridge was determined to be very effective, the aesthetics were unsatisfactory.

Powell’s stringing supervisor (Tom Sears) was asked to bring his 15 years of flutemaking experience and his artistic talents to bear on the aesthetic problem.  What he finally designed, after experimenting with several methods, was a bridge for the left hand which runs below, rather than above, all of the mechanism tubing.
The “hidden bridge” is so well designed and crafted that most players cannot even find it unless the bridge is shown to them.  Powell’s new hidden bridge design is mechanically simple and accomplishes the functionality of the bridge without any oversized or extra back connections.  Aesthetically, it is the equal of pinned mechanisms.

Posted by Powell Flutes at 1:51 PM