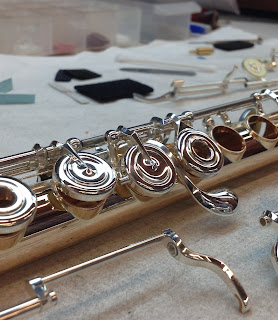 We've shared a few posts about Powell Handmade Custom flutes with a split-E, including a close-up on the mechanism and a quick snapshot from the finishing department.  You can find these posts by following this link to "Close-Up on Split-E" and this one to "Offset G and Split-E."

This week, we stopped by the finishing department as finisher Matt Keller was working on the split-E mechanism for an Aurumite 14k Handmade Custom.  So, we began to wonder... Are there differences between finishing flutes with and without the split-E? Matt told us that there are a few, and in general, a flute with a split-E takes longer to finish because it has more adjustments.  Of course, the adjustments are on the additional parts required for the split-E mechanism which you will see in the photos below:

Although it does take longer to finish a flute with a split-E, Matt feels that the independent motion of the mechanism's G keys can help with at least one challenge.  He explained that flutes without a split-E have two G keys that have to open and close together, as shown in the photo below: 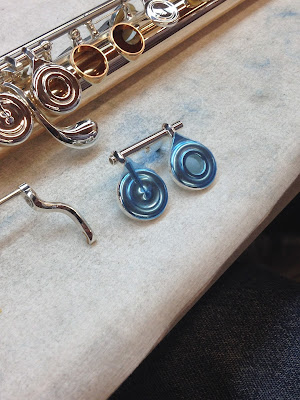 Matt told us that the synchronized motion of these two keys can make padding them quite complicated!  With a split-E mechanism, the G keys are separate and move independently, which makes padding them a bit less challenging than when the keys move together.  To demonstrate this, Matt released one of the springs so that we could see one of the G keys open and one of them closed (as highlighted by the red arrows in the photo below): 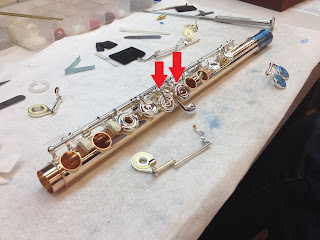 In conclusion, we realized that there are differences in terms of materials (additional adjustments on split-E), parts, and the mechanics of the mechanisms, but the finishing process itself remains the same -- and the end result is a smoothly functioning mechanism!
Posted by Powell Flutes at 10:40 AM